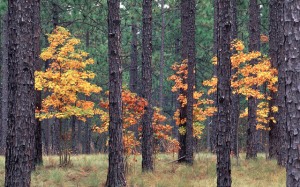 Recently, Dillon Epp, property manager of Orton Plantation, and I were fortunate enough to spend time with Dan Ryan from The Nature Conservancy North Carolina to discuss their incredible work to preserve longleaf pine forests across the state. While longleaf pine once covered 90 million acres of coastal plain from Texas to Virginia, today only 3 million acres remain. Dan leads TNC’s longleaf pine efforts and says that development and fire exclusion has led to the demise of these critical forests. With the changing climate, longleaf pine has become even more important due to its ability to withstand rising temperatures. TNC has planted more than 700,000 longleaf seedlings in the past 5 years in North Carolina alone and conducts controlled burns every year. Learn more about their efforts here.

Louis Bacon has supported similar efforts on the Orton Plantation. The focus of the property’s forest and wildlife management has moved toward an ambitious goal of restoring the Longleaf Pine and wiregrass ecosystem.  Long-term management plans have been developed to support a diverse forest ecosystem that will provide habitat for many threatened and endangered plant and animal communities. Work started in 2010, and by spring 2014 approximately 7,000 acres have been restored to become a permanently managed Longleaf Pine habitat.  With recent contiguous land acquisitions by 2017 his goal is to have 11,000 acres restored to a premium diverse habitat.

The combined efforts of TNC, its partners and restoration work occurring at Orton Plantation is an enormous windfall for the plants and animals of southeastern North Carolina. Work at this scale could not occur without partnerships, leveraging resources and sharing a collective vision for the restoration of the native ecosystem.